Gavin Stamp’s recent death – noted here and here – made me think about something he said when I was a student of his at the Mackintosh School in the early 90s. He showed the class a slide of Paul Troost’s Ehrentempeln and said (words to the effect of): ‘this is compelling architecture; don’t reject it just because it was built by the Nazis’. I want to consider this a bit. Take two statements as follows:

In context of a given political system, nothing is to be said about the rightness or wrongness of choosing one building style over another.

Statement 2 looks like a corollary of Statement 1, but is not. And it is false. Where a designer accepts the norms of a political system, he or she (implicitly or explicitly) accepts an obligation to design, by preference, in a certain way, or ways; the menu of styles does not remain open. This may be true even as nothing is said in everyday political conversation, under a certain system, about architectural style, and no laws or guides exist concerning architectural style. Why? The obligation comes about, at a minimum, because certain stylistic choices may have consequences which do fall under the scope of political conversation, and which are touched by extant law and guidance: practical consequences. For example, the compositional conventions of a certain style may tend to produce limited or irregular fenestration, while occupants may have limited freedom to move to areas with better daylight. This practical consequence may conflict with, for instance, a prior commitment to extend to all persons equal dignity and comfort. Or an over-glazed building might have excessive heat loss; problematic in a climate change context. These might seem dull, almost banal truths … but nonetheless.

Statement 2 does not follow from Statement 1 because the statements are temporally opposed. Statement 1 is retrospective; it concerns value judgements made about what has already been built; the practical consequences of the designer’s choices are assumed to have been felt, or to (at least) be irretrievable. The viewer assesses the aesthetic value that can be drawn from what now is, in the physical remains; the building is treated as a monument. Statement 2, by contrast, is forward looking. The designer is faced with choices; the practical consequences of those choices may still be felt, or avoided (if negative). The designer should make the right choices.

So, even as we reject Statement 2 – as I feel we should – we are free to accept Statement 1. But should we accept Statement 1? There is strong feeling about certain architectural styles, especially certain derivatives of classical style developed in the 20th century. For example, the recently proposed improvements to Munich’s Haus der Kunst (1933), also designed by Troost for the Nazis, were publicly criticised: the choice to remove trees hiding the main façade was condemned with the implication that the building is considered by some to be beyond enjoyment. Troost’s Ehrentempeln (monuments to Nazis who died violently in a coup attempt; the interior of one of the pair is shown below) were demolished by US forces in 1947. 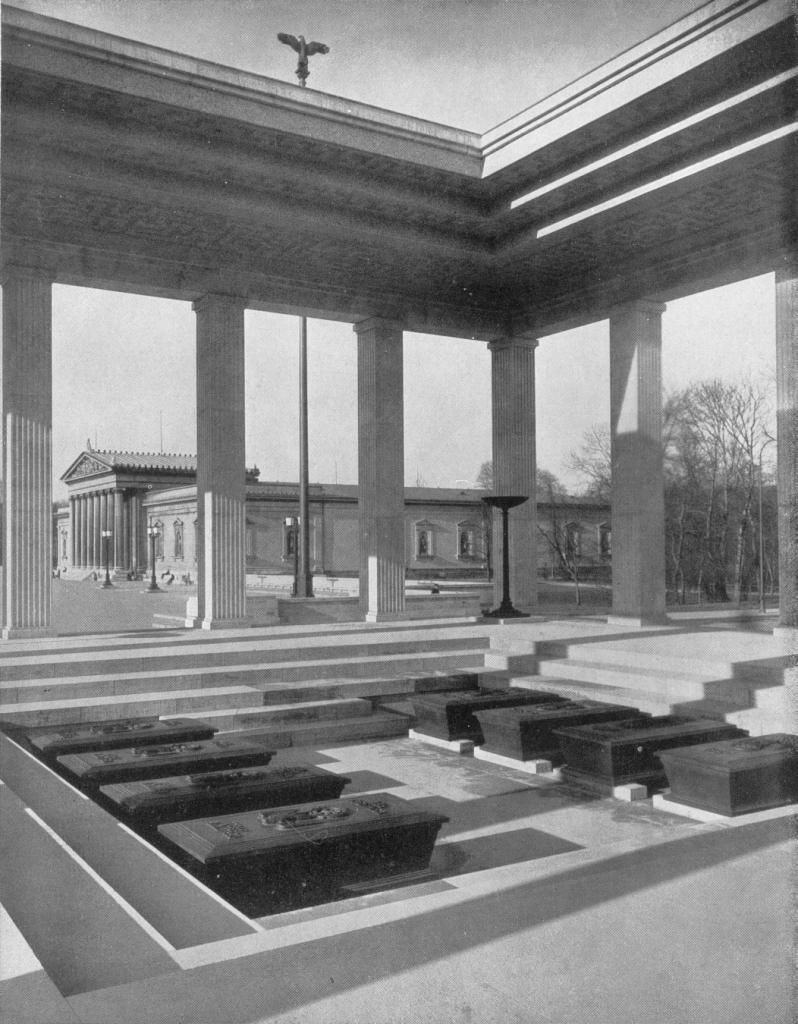 An instance of a style can be rejected: it seems reasonable to say that the Ehrentempeln – these particular buildings – if kept, would have memorialised that which should not be memorialised. But this does not reject the style. And there are implications for disavowing the style of these structures. Architectural ideas freely cross borders and polities. Compare Asplund’s Woodland Cemetery (below) with Troost’s Ehrentempel.

Beyond the resemblance, if there is a historical connection between the two, it may be traced to Muthesius and Europe-wide efforts to forge effective partnerships between design and industry; in the English Arts & Crafts movement and the similar Deutscher Werkbund (of which Troost was a member). It is incoherent to reject one and the same aesthetic where it shows up in a deprecated polity and embrace it where it shows up in a healthy one.

Update: since writing a newer post (itself written in response to the proposed Trump executive order requiring that US government buildings be built in a classical style) I felt I needed to revisit this post. And my view has hardened: I think Statement 1 above should be decisively rejected. Something bad in the human psyche is reflected in classical buildings, and in modern buildings that make a very close approach to classicism.

View all posts by charlespwhitaker